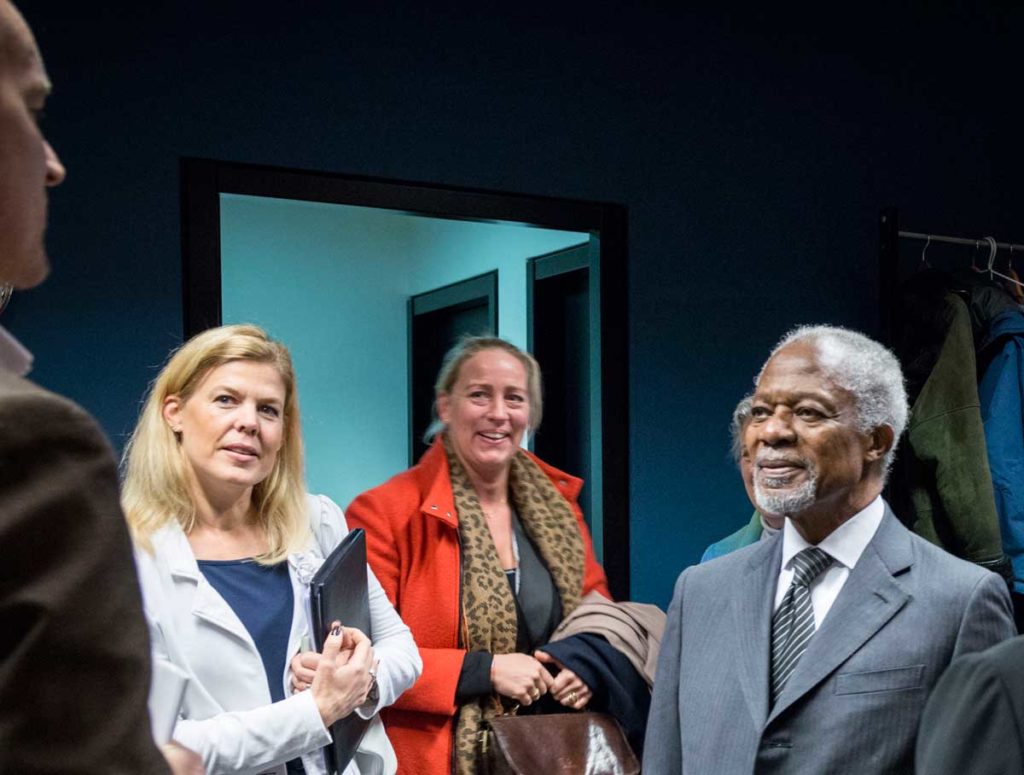 Earlier this week I arrived in Amsterdam where the international Junior Chamber (JCI) hosted its annual congress. At the heart of this event, the WeDo2030 festival took place, dedicated to committing to the the #UN’s 17 Sustainable Development Goals. Some 4500 delegates from over 80 countries flocked into town earlier that week to meet, connect and engage with fellow JCI members, a network community of nearly 200.000 engaged millennials worldwide. My job as chair and moderator was to ensure a smooth and lively conversation with an impressive line up of speakers throughout the day.

Mr. Annan upon his arrival was accompanied by his wife Nane. He is exactly the way we have seen him on the world stage; gentle, friendly, calm and composed and took his time to meet and greet everybody. The joy and excitement on everyone’s’ face backstage relieved the fatigue on some, especially for the amazing JCI production team present. They had all been working towards this event tirelessly for the last 2 years, in their free time. Annan is a strong supporter of JCI where he was once a member in the US. These are enthusiasts who apart from their jobs, devote time and effort to the world around them by doing projects that make a difference in people’s lives. He knows where the gold is.

Upon his appearance, the audience went wild with a standing ovation. By the time Mr. Annan started his talk and the audience had taken their seat, the emotions in the crowd had unsettled me a bit. He is amongst the few living beacons of hope and inspiration to many. During our subsequent panel conversation, we talked about connecting generations and empowering youth in leadership roles. “Leadership”, he said, “is the ability to also follow and to listen.”

Joined by Arrey Obenson -a remarkable Cameroon born human rights lawyer and Secretary General of JCI- we discussed youth participation in peace processes, the impact of “America first” politics and the importance of political engagement, the need for building stronger institutions and respect for human rights. We had launched an #askkofi on twitter drawing people outside our room into the conversation that the ones in the room read out loud. We spoke about his JCI membership and how it had shaped his career. Someone in the audience asked him to share some of his critique about the millennial generation. How original!

Tough questions were raised too, for example about how to prevent future massacres which came from a Rwanda genocide survivor in the room. Under mr. Annan’s leadership, the UN Security Council in 1994 had failed to reinforce the small UN peacekeeping force in the country. With recognition and compassion he reflected on his role as head of peacekeeping operations at that time explaining that one of the failures was caused by the UN not having its own army. In 2004 during a BBC interview he had said that “I realised after the genocide that there was more that I could and should have done to sound the alarm and rally support.” Someone else in the room asked about the necessary but failed reform attempts during his 10 years as Secretary General where “God created earth in 6 days”. Annan: “Because God could act alone and I was dependent on other member states ”.

After our panel, another long standing ovation. Backstage he thanked the team. We wished him well and said goodbye, before he went on his way to another cause elsewhere on the planet.

Attachment: what leadership and parenting have in common

I believe in diversity. But does it show?